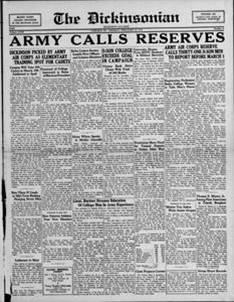 Then as now, the  Dickinsonian covered topics that were a concern for the students at Dickinson. The Dickinsonian had an active voice in World War II and the war’s effect on campus. Between March – April of 1943, the Dickinsonian took a budget cut and was printing the newspaper in a micrograph form. It is in these issues of the Dickinsonian where the Air Cadet Program was talked about most in, particularly in a special section called “Vignettes of the Army.” One story goes like this:

“Rumors fly as thick and fast now as ever. And one of the best yarn product of the rumor-factory, was current last weekend. What were of essential basic facts of the matter we won’t go into now. But by the time the story reached us it went something like this: The other night after supper some of the soldiers had a falling-out with the cook, threatening dire and sinister things if he didn’t put his establishment on a la carte basis promptly. The cook, not liking to have his profession impugned, stood up for his beans. But in any basis of arithmetical strategy, 500 men are more than a match for one, and these 500, or portion thereof, seized the cook and threw him, all protesting, into the oven. Of course, the report may be exaggerated, but nonetheless there is something worth chuckling over. I thought of a cook’s being thrown for punishment’s sake into his own oven.” (“Vignettes of the Army.”  Dickinsonian March 20 1943, pg. 1.)

It is safe to say that most of the stories in this section were greatly exaggerated, but this shows the newspaper’s interest in the comings and goings of Air Cadets.

On the last day that the Air Cadets were on campus, this quote appeared in the Dickinsonian. It both praised the program and criticized it:

“It is with a real sense of regret that the College views the passing of the Thirty-second Air Crew Detachment from campus…true it is that by its presence certain inconveniences have been caused to the faculty, administration, and student body…[yet] to have had small share in the realization of this program has been an honor for Dickinson College.”