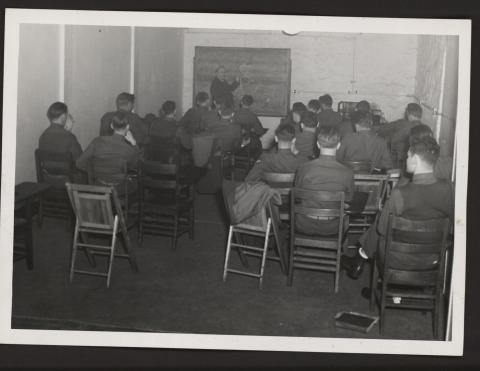 Here Air Cadets are having class in a put together classroom. Lack of space was a huge issue for the Cadet program, so classrooms like these were common.

The 32nd College Training Detachment made itself felt everywhere on campus. About 700 new air cadets came onto campus in March of 1943, but the civilian campus ran as scheduled. In order to do this, there had to be some readjustments. For the civilian college, classes were shifted into the afternoon, while the Air Cadets had classes in the mornings and evenings. The Air Cadets were also given space in areas on campus including Denny Hall, Old West, Tome, Bosler Hall, the Psychology building, the Gymnasium, Conway Hall, East College, Frat Houses, and athletic fields. As the two programs occupied the same spaces, the college tried their best to keep the Air Cadetsseparate from the civilians. For example, in Denny Hall, civilian classes met in the north half and air cadet classes met in the south. The Air Cadets also had separate housing and dining areas from (and better food than) the civilian students.