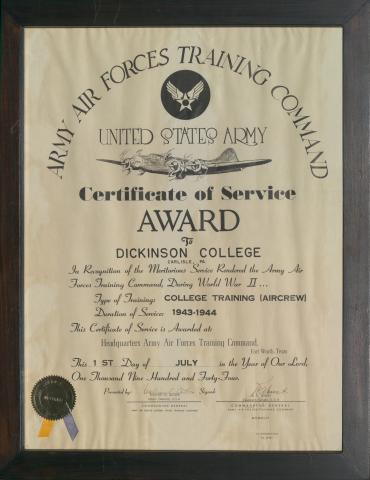 At the beginning of the war, planes and equipment were limited and training requirements were lax.[2] The reorganization and readjustment helped to fix these problems. To help train better airmen, during the beginning years of WWII the Civilian Pilot Training Program was established by Robert H. Hinckley.[3] Ironically, Dickinson College participated in this program from 1939-42 before the Air Cadets were stationed on campus.

Recruitment done before Pearl Harbor focused on college students; these men were thought more active and reliable due to their young age.[4] By 1938, recruitment policy started to officially expand. Procurement was decentralized[5] and the “Cadet Qualifying Exam” was established to test the knowledge of incoming air cadets, along with a psychometer test and an interview with a psychologist.[6] This helped to fill the skies with well-equipped pilots.

The Air Cadets were part of the Army Airforce. (It was not until after WWII that the Air Force became independent branch of the armed forces in the United States.)[1] With the development of new requirements for becoming a pilot, the Army realized more men needed a pre-training program to help them prepare to be full members of the Air Force. That was when the College Training Program was established. This program “provided additional training in math and physics, basic military indoctrination, and [kept] service volunteers employed while awaiting formal aviation cadet training programs.”[7] This was the program that Dickinson College, along with other small liberal arts colleges joined. By the end of the program there were enough airmen being produced to meet wartime needs and blockage of trainees had been eliminated.[8] The program helped to bring well qualified men into the Air Force, reshaping the Air Force.

[1] Dr. Bruce A. Ashcroft, We Wanted Wings: A History of the Aviation Cadet Program, HQ AETC Office of History and Research: Randolph Air Force Base TX (2009), 31.

[6] Ashcroft, We Wanted Wings: A History of the Aviation Cadet Program, 33.