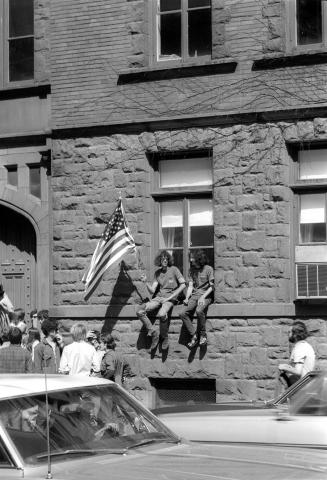 Radical protesters sit outside the entrance to Denny, blocking the ROTC department. 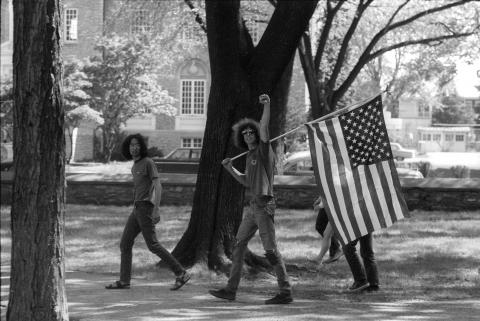 Student protesters walk across the Academic Quad towards Denny to join the sit-in on Tuesday. 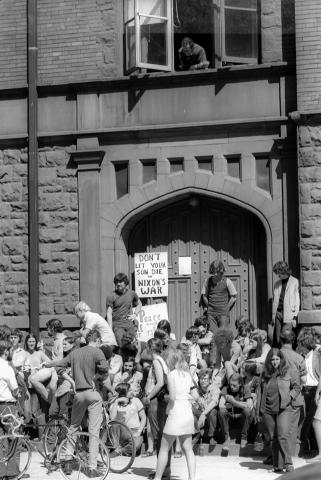 As the first day of the strike began, it became obvious that the divisions within the student body remained. “The previous night’s fiasco had proved little except the existence of the people concerned. There was almost no cooperation between opposing factions and nothing constructive was being accomplished,” wrote one student. Even though the students had agreed to strike the night before, the vast majority still attended classes the next day, to the annoyance of the radical factions. No academic amnesty had been granted and failed classes could expose students to the draft – for many, these stakes proved too high despite their political leanings.

Even those fully committed to the cause questioned the method: “The complaints of these students were political rather than academic; therefore, a protest which disrupted the academic system of which they are voluntarily a part seems misdirected,” argued one student. When only 350 students showed up to the Tuesday morning meetings, many concluded that “it looked pretty much as if the Dickinson strike was over before it began.”

The students who did attend these meetings began drafting the objectives of the strike. At the 11 am meeting, this assembly listed the immediate U.S. withdrawal from Southeast Asia, the release of all political prisoners, the severing of ties between the College and the Pentagon through the abolishment of ROTC, and academic amnesty for striking students. The students also agreed to plan a march on the War College for Friday to coincide with the visit of General William Westmoreland, the former leader of the US army in Southeast Asia, for VE day ceremonies and the dedication of the Bradley Museum. “We were fortunate in having the War College here because it was a clear, obvious symbol of the U.S. military,” remembers Pierce Bounds, “that’s where they send all their best and brightest colonels to learn the arts of war.”

Later at 2 pm, the student assembly met once more and formed committees. They announced that a general assembly would be held on Wednesday to vote on a referendum to determine the aims of the strike, in hopes of moderating some more radical proposals to “be palatable to the student body.”​

While some students built coalitions, the growing frustration of the fringe erupted into an unplanned sit-in around the inside and outside of Denny Hall. Alumnus Edward Guido remembers that the most extreme of this faction wanted to burn the building to the ground, recalling one of his Fraternity brothers who was highly influenced by Marxism telling him, “This is ridiculous, this is the time, this is the revolution, I’m going to take to the streets, property means nothing… we got to burn down Denny to show that property is irrelevant.” While some radicals flirted with actual destruction, most claimed the purpose of the sit in was to give students missing class an excuse and therefore avoid academic consequences. “This reasoning seems to lose weight when one realizes that by this time of day, most classes for the day were over. It seems to have been a move by the radical students to claim the support of the more moderate element, whose support they realized they had lost the evening before,” noted one student.

Regardless of the intent, few students or professors were actually affected. Vickie Kuhn, a secretary for the Political Science Department, recalled that they let her pass into the building without any trouble: “We thought they were probably just trying to make a statement, you know just be out front and make their feelings known about the war and everything,” Kuhn remembers. The sit-in attracted a considerable audience, who watched the “unorganized, unruly, and at times obscene” protesters from the Academic Quad.

Whatever the group’s intentions, the sit-in alienated moderate protesters already skeptical of the SDS. “For the most part, they were young radicals, some of whom I know personally, who were simply pleasure-seeking. I talked with one of my friends after the demonstration and he told me he had participated in it mostly because it was the ‘thing to do,’” recalled one student. The unplanned action proved immediately problematic to the more moderate students. “We really played at being hippies and played at being freaks,” explained Poole, “so I don’t think we really had the passion that people in places like Berkeley did.” The threats to burn down Denny and even the acts of civil disobedience were far beyond the comfort of the majority of the student body, and so the unplanned sit-in forced the moderates to question what exactly they had signed up for.

At 10 pm, Plymyer was faced with the formidable task of uniting a fractured student body after a day of serious division. As students gathered in the Social Hall, Plymyer pleaded for unity and constructive action and was met with a largely positive response. “Positive action was now a definite possibility, for a coalition, or at least a compromise between moderates and the more radical students now seemed possible,” wrote a student. Proposals for a letter writing campaign, hunger strike, and telegram campaigns were all met with approval and began to take shape.

A proposal for a teach-in was also approved and included diverse representatives including students from SDS, the Afro-American Society, moderate Sandy Weinberg and liberal Stan Shulman. One student wrote that while “skepticism was allowed, opposition was not”: when conservative Chris Zimmerman asked to join the panel, the assembly voted down his proposal. Shulman also proposed an item for the referendum asking that all Vietnamese who desired it be given American citizenship to “save as many lives as possible.” The proposal was received favorably and included on the referendum. SDS representative Greg Shumers described the war as “economic exploitation” and called for a coalition of students and workers to pressure Nixon into troop withdrawal. While diverse opinions were expressed, the Tuesday night meeting was considerably more efficient than the night before as students recognized the need to be strategic, instead of reactive.

While included on the teach-in panel, the African American students began to distance themselves from the movement as racial tensions increased that night. Late that evening, a young Black town resident was thrown out of Biddle House for “harassing” girls living in the dormitory. “As the meeting cleared out to see what had happened, racial tensions were extremely high,” remembered one student. Although the Afro-American Society made no declaration at the moment, the student recalls representative Ken Woodard saying, “No more talking, just fighting.”  It was reported that later that night Woodard was involved in a physical confrontation with a white student.

For the majority of the protesters, however, Tuesday represented a major milestone: the major factions had successfully united. “By Tuesday night, the polarized feelings between moderates and radicals had healed; the moderates had become a little more radicalized, the radicals realizing that nothing could be accomplished, without some rational thinking.  A new spirit of cooperation descended upon the meeting; unity became the key.”