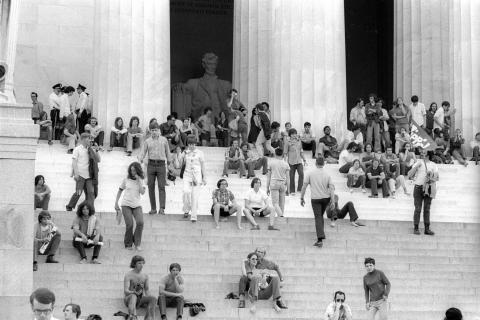 Protesters from hundreds of universities gathered in D.C. to protest the war policies of President Nixon. Here, student protesters look out from the steps on the Lincoln Memorial. 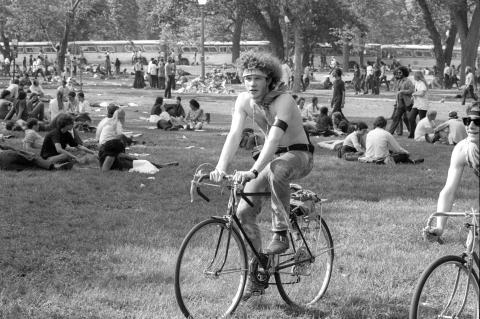 Students from around the country gathered on the Mall to show their disapproval of the escalation of the Vietnam War. 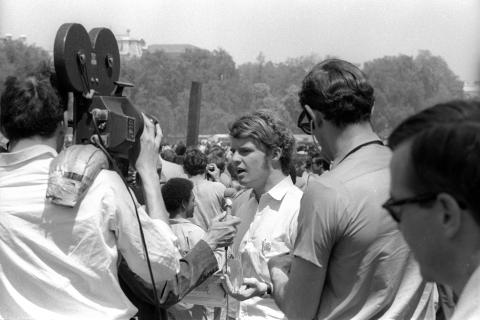 Young liberals gathered on the Mall to show their disapproval of the escalation of the Vietnam War.

Early Saturday morning, a busload of students set off for the national march in Washington D.C., where somewhere between 75,000 and 100,000 college students protested the expansion of the war at the rear of the White House. Students who attended this march wrote excitedly about their experiences: “We are in Washington D.C. and there are thousands of shouting and yelling young people,” remembered one protester, “They seem to fill the city.” Poole remembers searching out the Yippies at the march in hopes of getting tear-gassed as the climax of their anti-war experience. Successful, they came home “crying but happy.” This march was less intense than those in Washington in the past year, and the students expressed confidence that no violence like Kent State would take place. While Dickinson did help fund the bus ride, Bullard recalls that the protesters “wanted to be part of a larger context than the college context. So we didn’t go as Dickinsonians, we simply went as American citizens.”

Back on campus, however, the adrenaline-filled rush of the week had come to a close. The majority of the protesters finished up their finals if they had elected to take them and traveled home for the summer. The administration decided not to have commencement, citing the safety of the students and liability for the college, and chose to send their graduates home early.

Students from different factions reflected on their experience in different ways. The more politically active continued the effort by joining local committees and continuing the letter-writing campaigns. One student remembered a strike headquarters maintained at Dickinson over the summer. Yet the rapid departure of the majority of the moderate protesters left some disheartened and questioning the success of the week. “Disappointment has been expressed and the sincerity of the students in general questioned because during the week many people were held suspended by an emotional tension that crumbled and died when the week was over, an emotional tension that left only a minimal residue of organized effort to reform on the minds of participants in the weeks that followed,” wrote one such student. By the following Wednesday, only the lone anti-war table of the SDS remained.

Yet for the more moderate students who had their first experiences of political activism, the week was largely framed as a success. “The week gave the students a chance to think about the things occurring in their world, gave them a chance to express their opinion in most any form without restrictions, and gave them the opportunity to approve/disapprove of any national/international occurrence in an atmosphere conducive to both passive expression and hopes of reform,” remembered a protester.

As students returned home for vacation, exhausted by the emotional events of the week past or perhaps still energized by its momentum, it seems that most saw the events as significant, whether or not they had any true impact nationally. In essays written by students that spring and the following fall, it is clear that the protesters saw their actions as significant, despite the fact that the march had attracted very little national attention, resulted in no legislative changes, perhaps made no political impact at all. As they reflected, students claimed something more abstract: a voice in their society. They saw themselves being written into the history books as something much larger than their own march down High Street. “Roles have changed; where children in college were once relegated to paternalistic control, they have now become men and women in the vanguard of social awareness,” wrote one student, “the era is a new one.”