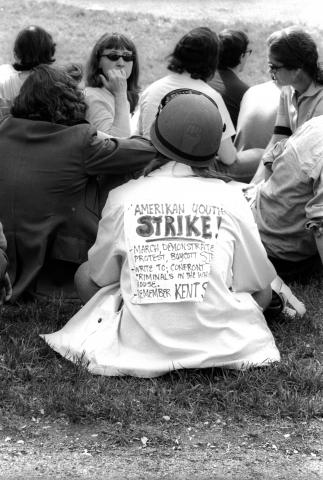 A student waits on Morgan Field for the march on the War College to begin.

“There were seismic shifts, several of them, all in close proximity,” remembered former College President Bill Durden of the late 1960s at Dickinson. In the turbulent years leading up to the Kent State protests, the college had abandoned the rigid social norms of the 40s and 50s and instead embraced a strengthened anti-government sentiment, the emerging sexual revolution, and even witnessed a growing drug culture. While this social change permeated all levels of society, it was especially powerful on college campuses. These developments led to a new protest culture, manifested in opposition to the Vietnam War.

Despite its smaller and more moderate student body, Dickinson was deeply influenced by the powerful political and social revolutions of the late 1960s. As a new spirit of agitation spread among the younger generations, demonstrations of diverse natures became part of the social norm. Such events at Dickinson were not always political: more than one thousand Dickinson students turned out to participate in “the March for Better Architecture” in 1966, for example. But these protests grew in intensity as issues of war grew increasingly relevant to the students. The draft brought the reality of war into sharp relief, especially as Dickinson students realized that the lottery system was no better than the unpopular selective service. Especially as Nixon discussed a review of educational deferment policies, students lived with the fear of being sent off to war. “You could be plucked out of philosophy class one day and told ‘go fight for Uncle Sam,’ And that sort of made it ‘up close and personal,’” remembered alumni Pierce Bounds.  Personal worries spurred further protest of the war on campus, especially as the anti-war movement grew into the mainstream. Dickinson witnessed a demonstration over the bombing of North Vietnam in February 1967 followed by a three-day fast, and a smaller march on the Army War College on Vietnam Moratorium Day in October 1969.

By 1970, most of the country was “sick of war,” remembered Bounds. Opposition to Vietnam had lost its social stigma as more visible figures spoke out against it,  and the country grew less polarized as discussion grew more critical of Nixon’s policies. Yet while an increasing number of Americans embraced the anti-war movement, the town of Carlisle, Pennsylvania remained staunchly conservative. Students remembered considerable tension  between the students and the townspeople, derogatorily referred to as “townies.” The tensions stemmed largely from a deep socioeconomic divide: while Carlisle’s 16,000 residents were 94% White, voted solidly Republican, earned an average of $6,920 per year and held generally low levels of education, Dickinson students were comparatively upper-middle class, more diverse and generally more liberal than their neighbors. “There is much friction between college students and ‘townies,’” remembered one student, “Occasional scuffles break out between the two groups of youths.” This troubling dynamic proved problematic as student protests moved off campus into town spaces. Bullard recalled that the townspeople “saw the college students as not understanding the situation and being a dangerous force of disunity.”

The disapproval of the town did little to stop the anti-war movement on campus, however. While the peace movement was largely dormant after the 1969 march, anti-war sentiment was awoken once more on April 30, as President Nixon announced the expansion of the war into Cambodia, an effort that would require an additional 150,000 soldiers. In response to Nixon’s speech, a series of rallies began at Kent State University in Ohio. The nation watched in shock as 900 National Guardsmen patrolled the campus, 28 of whom opened fire on a crowd of protesters and killing four. The death of four students recharged the movement at both larger, more politically active schools and smaller liberal arts college like Dickinson. The emotional news proved the necessary catalyst for Dickinson’s largest anti-war action yet.

National news was not the only cause of conflict: the shock of incidents around the country was compounded by developments on campus. Earlier that day, students had participated in the room drawing for next year, and many had found themselves with undesirable rooms, or no rooms at all. At the room drawing, racial tensions had begun to develop. Students reported that African-American girls had used “threats and intimidating signs” to discourage white girls from living in Sellers house, so the building might become an all-Black dormitory. In addition to the racial tensions, academic pressure of finals loomed ahead. Monday and Tuesday were the last two days of classes, so students were stressed with papers and tests, as well as preparation for upcoming exams. The rising pressures on campus exploded into unprecedented action as news of Kent State hit the campus.

As students began to organize, the administration worried that they would face another Kent State, especially as more radical organizers began to discuss civil disobedience. Despite its anti-war leanings, however, Dickinson was never destined to be a radical hotbed. Most of Dickinson’s students were middle class “happy warriors,” unwilling and unlikely to attempt true radical protest, remembered alumni Bill Poole. Music Professor Truman Bullard remembers that ideologically, there was “a certain homogeneity in the faculty and in the student body. And people tend not to see things from shouting marches or oppositional points of view. They tended to see things in tints and pastels rather than in primary colors.” Yet while the campus protest culture was often a modest imitation of more intense movements at larger, more politically active universities, a spectrum of political activism still existed. As one remembers these student factions, note that this retelling has labeled the groups as they described themselves and were remembered by their peers in a collection of student essays, alumni interviews, and newspaper articles (and therefore modern connotations of 'liberals,' 'moderates,' 'radicals' etc. ought not to be retroactively applied).