Sucking the Air Out: The British Scientific Revolution 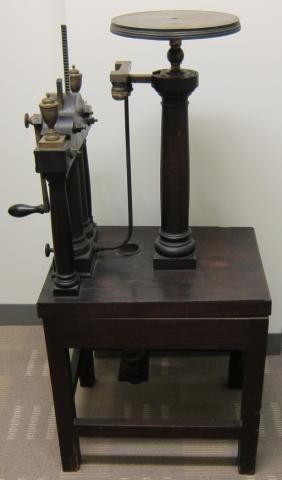 In an outside arena in Regensburg, Germany, the Imperial Diet of the Holy Roman Empire, headed by Emperor Ferdinand III, gathered around two teams of fifteen horses each.  The horses, strapped to either side of large bronze hemispheres, could not pull them apart despite their great strength and numbers.  However, when Otto von Guericke, mayor of Magdeburg, opened up a small air valve, the seal between the hemispheres broke, sending the horses flying in opposing directions.

Guericke’s 1654 experiment came to be known as the Magdeburg Hemispheres demonstration.  Guericke used the large bronze hemispheres to exhibit a long-debated concept in air chemistry, that of the vacuum.  By sucking the air out of the sphere with his newly invented air pump, Guericke asserted that he had proved the existence of the vacuum, settling a debate started by Aristotle during the 4th century BCE.  Guericke’s air pump did not feature any kind of glass bulb or display area, a common feature of later machines.  Instead, Guericke’s pump was used solely to evacuate the large sphere of air, demonstrating that a vacuum could in fact exist.

Robert Boyle and Robert Hooke, inspired by Guericke’s work in pneumatics, created a new, more efficient air pump in 1659.  Boyle’s pump, unlike Guericke’s, had a new purpose: creating a space evacuated of air, in which he could experiment.  To facilitate this goal, Boyle’s pump features a glass globe, in which experiments were performed.  Boyle’s pump and those that came after it symbolize the vast array of pneumatic experiments possible within a vacuum, which was accepted as scientific fact by the 19th century.  As a result, the air pump was essential to scientific experimentation and education in the 18th and 19th centuries, and was also a prestigious object for a scientist or organization to own.

This helps explain why the air pump was crucial to Benjamin Rush’s efforts to supply the college with scientific equipment.  Rush doggedly hunted for the pump, believing that pneumatics were essential to the study of Natural Philosophy.  The first air pump, a double-barreled model, arrived at the college in 1808.  Rush specifically sought a pump made in the United States, believing that it would be “more complete than those made in Great Britain.” (7/5/1808 letter).  Scientific instruments during this time were hand-made by scientists, making Rush’s prominent position in Philadelphia’s scientific circles key in the search for suitable instruments for the college.  The pump was mostly used for demonstrations during scientific lectures, displaying the theories of pneumatics live for students to witness.  The double-barreled pump remained in operation at the college for decades, replaced by more powerful and efficient tabletop pumps in the late 1800s which created a longer-lasting and more evacuated space for experiments.

The college acquired new pumps, including an oil-sealed Fleuss Pattern Air Pump, as recently as the turn of the 20th century.  These newer, more versatile pumps helped professors and students perform myriad experiments in air pressure, air resistance, vaporization, and chemistry.  Pneumatic chemistry, although replaced by electricity as the “in vogue” science by that time, remained integral to scientific education at Dickinson well into the 20th century.