Showing Off: Scientific Lecturing in the 19th Century 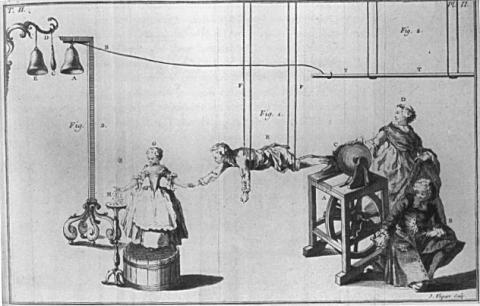 In the summer of 1863, James Dale Owen arrived in Dubuque, Iowa, posing as a representative of the Smithsonian Institute.  Under this ruse, Owen served as a judge of the state agricultural fair, was donated many expensive scientific specimens, and honored by the leading political and scientific men of the city.  It was not until Owen departed that Dubuque found that he was nothing more than a confidence man, playing on the ambitions and fascinations of the American public.

Science was a fascinating topic to 19th century Americans, as it represented both progress and intellectual growth.  As a result, members of all levels of society hungered for scientific knowledge.  The public lecture thus emerged as a central facet of 19th century science and education.  Educated individuals and swindlers alike could make a living as itinerant lecturers, and middle- and upper- class audiences paid well to see enjoyable and instructive performances.

Travelling lectures were common during the 1800s, and were often announced weeks in advance of their actual date, generating much buzz in America’s removed cities and towns.  Lyceums were greeted with much fanfare in these relatively isolated cities, and drew audiences from miles around.  Held in front of hundreds of people, scientific lectures involved audience participation, shocking interested volunteers and showing how scientific principles could be applied to everyday life.  These lectures helped support a growing public interest in science, and inspired many members of society to study science as a hobby.

Scientific lectures were part of a larger historical trend known as the lyceum movement.  Lyceums were large public gatherings for speeches, debates, and orations, and were popular throughout the 19th century.  In the antebellum period, lyceums often featured scientific demonstrations which would amaze large crowds of onlookers.  Lyceums traveled from town to town and state to state with their shows, making them one of the largest sources of adult education during the period.

19th century audiences across the United States were drawn to science lecturers for both their educational and entertainment value.  Travelling science demonstrations fed the appetite of the middle and upper classes for new scientific knowledge, showing audiences some of the latest advancements and discoveries in fields such as electricity and pneumatics.  The lectures also promised to help improve daily life, demonstrating how basic principles of chemistry and physics could ease housework and improve natural understanding.

Apart from being educational, science lectures were just plain fun.  Those who could afford to attend were amazed by the sheer showmanship of many scientific lecturers, showing the more spectacular side of concepts in pneumatics, chemistry, physics, and electricity.  This made lectures big events, drawing large crowds and plenty of local coverage in newspapers and town meetings.  Audiences were amazed by the lecturer’s ability to control nature and create new, unexpected sensations.

Pneumatic science was especially appealing to viewers, as the lecturer was using the invisible to make visible changes on their surroundings.  Extinguishing a candle in a vacuum, creating a fountain in a sealed globe, and suffocating small animals using an air pump are some of the many experiments that mystified and excited audiences, making an otherwise empty space spectacular.  This drew upon many of the advancements of the British Scientific Revolution, which explored the possibilities of the vacuum.

Electricity was another sensational science common in travelling demonstrations.  The rapid expansion of electrical science, portrayed through the newspapers and magazines of the day, captured the public’s imagination.  Scientific lecturers thrilled and (quite literally) electrified audience members with demonstrations using electric generator models and other specialized equipment.  An example of this is the use of the insulated human body to conduct electricity.  By suspending a person from silk cords, electricity could be passed from a generator to another person, or to an instrument of some kind.  By the turn of the 19th century, electricity was already gradually replacing pneumatics as the popular science, a symptom of increasing interest in electrical discoveries and the fame of individuals including Benjamin Franklin.

Scientific lectures were part of a larger movement towards enlightened rationalism during the 19th century.  Electricity and pneumatics were intellectually curious phenomena, and so the intellectual pursuit attached to public lectures and demonstrations fed a rational hunger for knowledge.  At the same time, new scientific spectacles, especially electricity, were sensational, throwing the audiences into wonder.  The feeling of electricity throughout the body excited viewers, convincing them of the power of science and the presenter.  The duality between rational intellectual curiosity and sensational wonder allowed lecturers to control public views of science and intellectualism.  Although lyceums became more politically charged after the Civil War because of sectional tensions, religious sermons, and rights protests for African Americans and women, scientific topics were featured in travelling lyceum fairs as late at the turn of the 20th century.

Scientific lecturers were welcomed wherever they went, and as a result were a common disguise used by hustlers.  Demonstrations could be attended by the masses for a small fee, and the upper echelons of society were especially interested in the lectures.  With a few simple tricks and a little bit of lying, a con man could move from one town to the next, swindling the trusting public out of their admission money.  The practice was prevalent during the time, but did not dissuade large crowds from enjoying the sensational mystery of the science lecture.

Science students were linked to the lecture culture of the 19th century in complex ways.  While many individuals were inspired to study science by lectures, traveling demonstrations could not replace collegiate science education.  However, the general public came to see demonstrations as the true test of scientific capabilities.  The standard of science set by lyceums, as well as the general mystique around science, made demonstration an important skill for the 19th century scientist.  Anyone educated as a scientist was expected to be able to publicly manipulate nature, even though such demonstrations were barely connected to the experiments of the laboratory because they only showed what was already known.  As a result, science students had to learn how to perform such demonstrations, despite their lack of connection with academic sciences outside of public view.

Goldstein, Daniel. 1994. “’Yours for Science:’ The Smithsonian Institution’s Correspondents and the Shape of Scientific Community in Nineteenth-Century America.” Isis, 573-599.