Milling Around: Air Resistance and the Vacuum 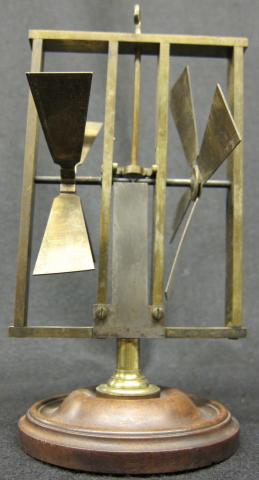 The air mill in the Dickinson College Archive is, at first glance, unassuming.  Two sets of brass blades, set at different angles, are held by independent axis rods in a simple metal frame.  Used in scientific demonstrations in the 19th century, the air mill shocked contemporary audiences.  The fascination with air mills gives a window into the role sensationalism played in 19th century science lectures.

Air mills demonstrate an important concept in pneumatics: air resistance.  The horizontal blades maximize the amount of air resistance, while the blades set at a near vertical angle minimize air resistance.  The blades could both be set in motion by the use of a weight system built within the frame, showing the effects of the vacuum on their rotation.

The experiment with the air mill consisted of three parts.  First, the lecturer would spin the blades under normal conditions.  As a result of air resistance, the horizontal vanes would come to a quick stop; contrastingly, the near-vertical blades would continue their rotation for some time, because they were subjected to less air resistance.

The mill would then be placed in an air pump, which would be partly evacuated of air.  In this partial vacuum, the experiment would be repeated.  Although the horizontal blades would still stop before the vertical ones, the difference in stopping times would be dramatically reduced, because the vanes are resisted by a lower amount of air.  The air pump would then be completely evacuated.  In the total vacuum and in the absence of air resistance, both blades would spin for the same amount of time.