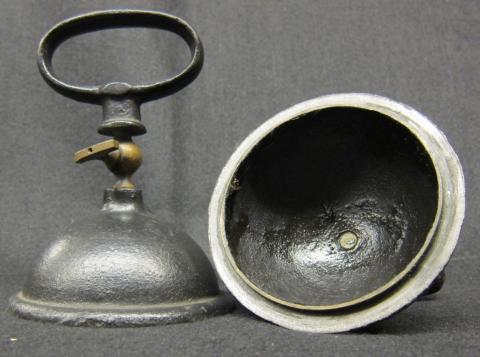 Made of cast iron and lined with grease, the Magdeburg hemispheres at Dickinson College tell the tale of early pneumatic demonstrations in university science lecture halls.  The hemispheres are miniatures of those used by Otto von Guericke in his 17th century demonstration of the power of the vacuum.

Miniature Magdeburg hemispheres could be used in numerous ways, demonstrating the basic tenets of air pressure.  Students could attempt to pull the hemispheres apart, to no avail, as the air pressure within the sphere was lower than that in the room, and would require significant strength to separate.  For the same reason, weights suspended from the bottom hemisphere would not pull the apparatus apart.  The hemispheres are only separable after air had been let back into the chamber via a valve at the top of the device.

The miniature Magdeburg hemispheres are one of the many apparatuses used at Dickinson for pneumatic demonstrations.  Engaging students by pitting human strength against pneumatic science, the hemispheres engaged audiences of students and the public, feeding into the showmanship that was so central to scientific lectures of the time.  Just like their initial use in front of the Holy Roman Emperor, the Magdeburg hemispheres displayed in grand fashion the power of the vacuum and the allure of pneumatic chemistry.