Life and Death in a Vacuum: The Mechanics of Breathing 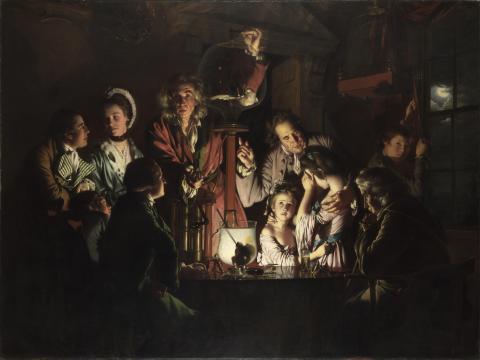 In a dimly lit room, family members gather around a frightened bird, trapped within the glass bell of an air pump.  While the adults look on with quiet contemplation, small girls mourn the impending death of the creature.  With the turn of a crank, a double-barrel pump evacuates the air from the bell, slowly suffocating the helpless bird.

Joseph Wright of Derby’s painting An Experiment on a Bird in the Air Pump dates from 1768, and depicts a common demonstration in pneumatics and biology during the 18th and 19th centuries.  Experiments using birds and other animals were very popular in air pump lectures, stunning middle- and upper- class audiences by altering the mechanics of breath and movement.

The most common experiment using a bird and an air pump revolved around the physics of respiration.  By creating a vacuum, the air pump allowed observers to study the effects of atmospheric pressure on the mechanics of breathing.  In the vacuum, animals were unable to expand their lungs because of the lack of atmospheric pressure outside their bodies.  This study was not, therefore, about the biological or chemical necessity of air, but rather about the mechanics behind respiration.  Fish, frogs, and mice were also commonly used in such demonstrations to highlight their unique respiratory systems.  The reactions of each animal to partial and complete vacumms revealed the hidden mechanisms of breathing: hence, frogs could survive longer in vacuums because of their need for less oxygen, while fish floated to the surface of water as their swim bladders expanded.

A variation of the bird experiment involved the study of “poisonous air,” or what is now considered carbon dioxide.  The bell of an air pump would be emptied of air, and would then be connected to a hose with a piece of burning charcoal at the end.  Once the bell had been filled with the leftover air from combustion, an animal such as a bird would be placed in the bell, where it would quickly die.  Although the chemistry behind this phenomenon was hotly contested, the experiment’s results could be clearly applied to the natural world, especially in the mining industry, where birds were used to warn of decreased oxygen levels in mineshafts.

Image courtesy of Wikimedia Commons, and is in the public domain.