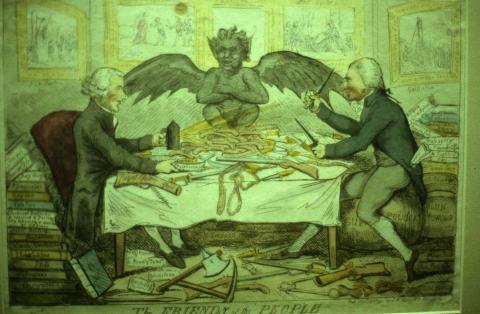 The Friend of the People

Deluge the throne with blood;

And lay the great and good,

Low in the dust.”

When Joseph Priestley's burning glass came to Dickinson College, it travelled down a pathway laid by scientific networks and revolutionary politics. In 1792, a Birmingham newspaper published a verse denouncing Joseph Priestley and Thomas Paine for sedition. Above, they printed an etching featuring Priestley (left) sitting with Paine (right) and the devil, plotting a violent revolution. Joseph Priestley was a renowned English natural philosopher, scientific investigator, dissenting clergyman and educator. As a political radical, he was dissatisfied with the established political system of Britain. Inspired by the ideals of the French Revolution, he wrote in 1977 that the activities of Dissenters like him were “gunpowder”, waiting to explode in a “revolution” to dismantle “the old building of error and superstition”. It seems unlikely given Priestley's connections that he was actively plotting a revolution, but he was antagonized by the established church and state, subjecting to pamphlet attacks and mob violence in Birmingham, 1791. The latter eventually forced him to flee to Pennsylvania, USA in 1794.

In this etching, Priestley and Paine sit on “gun-powder”. They are surrounded by piles of publications marked with words like “revolution”, “treasons”, “conspiracy”, “rebellion”, and “the rights of man”. On the wall several violent scenes associated with the French Revolution are displayed, featuring a person hanged on a lantern and a guillotine executing someone. Befitting his scientific reputation, Priestley is holding a lamp that is shown to be powered by phosphorous. Near his right arm is a gun inscribed: “Royal electric fluid.” The image of Priestley with his religious attire and the new weapons condemned as subversive not only his political ideas but also his religious and scientific background.

Joseph Priestley, depicted as a rebel in the etching, had spent years in his quiet laboratory doing experiments, studying a wide range of scientific phenomena including combustion (burning) and electricity. He was the inventor of “soda water” and the first person who extracted a gas later identified as Oxygen. Much of the scientific equipment he brought to America was purchased by Dickinson College with the help of Thomas Cooper and is still preserved in the Dickinson Archives. As well as a scientist, Priestley was also a diligent minister, defending the free practice of religion and the right of Dissenters. At the same time, he was also an outspoken supporter of the American Revolution and the French Revolution, fighting numerous pamphlet wars against powerful political figures like Edmund Burke and incurring many enemies from the English Established Church and State.

In combining dissent and science, Joseph Priestley was not alone. In the age of the First Industrial Revolution, rising enthusiasm for scientific knowledge and for exploring the material world led to the formation of many scientific societies, particluarly in the industrial towns of Northern England. On eof the most prominent, the Lunar Society of Birmingham brought together a group of progressive people who shared the common love of science: Joseph Priestley, Erasmus Darwin, James Watts, and many others. Like Priestley, many of them were Nonconformists and free-thinkers and were disaffected towards the English Established Church and traditional political institutions. Antagonized by the Establishment at the end of the 18th century, many of them were persecuted by the religious and political authorities and forced to exile. Priestley became the target of a violent mob in Birmingham in 1791, which eventually led to his exile to Pennsylvania, America in 1794, 11 years after the founding of Dickinson College. His belief in Enlightenment rationalism which was the backbone of his science connected inextricably to his advocacy of free religion and Dissenters’ rights. These ideas went against the religious and political order of the England society, making Priestley a politically controversial figure.