Did Anyone Discover Oxygen? 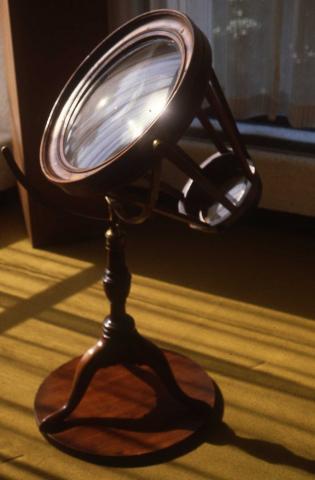 The bright sun rays penetrated the double lenses of the burning glass, focusing with great force on Joseph Priestley’s transparent tube. In just a few seconds, the bright orange mercury oxide inside the tube was melted, releasing a special air in which candles burned with exceptional vigor and living bodies breathed with pleasure. This moment in 1774 is usually called the discovery of Oxygen. However, historians of science know that the truth is more complex, more interesting, and more important.

The 17th and 18th century was the era of Phlogiston theory in chemistry. To Phlogiston chemists, combustion (burning) was the result of the release of a substance called “Phlogiston” from the burning object, a process that produced heat and light. The more rapidly “Phlogiston” escaped, the more vigorously the material burned. Seeing how brightly a candle burned in this new air, Priestley named the new air “dephlogisticated air”, because it must be so lacking in phlogiston that it vehemently seized the phlogiston from the burning material. When Lavoisier later displace the Phlogiston theory with the Oxygen theory, Priestley vehemently refused to accept the new term and the theory that went with it.  Not believing in “Oxygen” himself, could Priestley be called “Discoverer of Oxygen”? Historians of science would say no.

Antoine Lavoisier, a French chemist later known as the “father of modern chemistry”, provided a different explanation of Priestley's air. Wheras Priestley saw the air as ordinary air from which a substance called phlogiston has been extracted, Lavoisier saw it as a component of air - an element he called "Oxygen". Repeating Priestley’s experiments, Lavoisier argued that burning is not the separation of Phlogiston from the burning object but is instead a combination of the object with Oxygen from the atmosphere. This helps explain why roasted metals gain weight. Using this new theory of Oxygen, he overthrew the foundation of the Phlogiston theory and invented a new system of Chemistry, the quantitative system. This system revolutionized the idea of elements, supplanting the Aristotelian elements of earth, air, fire and water with the first list of elements that could not be decomposed into simpler substances: the “elements” known today. The series of changes Lavoisier brought to the discipline of Chemistry is popularly known as "the Chemical Revolution." However, Lavoisier did not explain burning the way we do it either. In order to explain the heat produced in combustion, he invented an element called caloric - a weightless object that was supposed to diffuse out of hot object. Though Lavoisier's Oxygen shared a name with today's Oxygen, his Oxygen did not look exactly like ours.

Looking at the history of science, few discoveries were made by a single “Discoverer” at a defined moment – the discovery of Oxygen is the greatest example. Knowledge production is a constantly evolving process as more scientists contribute to it new substance. Popular accounts of the history of science love moments of discovery - single flashes that reveal a truth. However, the story of the "discovery" of Oxygen reveals a more complicated reality, giving insight into two fundamentally different ways of looking at the natural world. Lavoisier’s ideas about Oxygen completely changed the way scientists view elements and chemical reactions – it is not simply the discovery of an ever-existing atmospheric gas, but a fundamental revolution to people’s mind.

Today, the burning glass of Joseph Priestley is proudly preserved in the Dickinson Archives, just inside the door on the right as you walk in. It is Priestley's most important instruments, possibly used to extract the first “dephlogisticated air”. In 1811 Priestley's friend, fellow radical, and Dickinson Professor Thomas Cooper purchased for Dickinson a number of Priestley’s scientific instruments for Dickinson, including this burning glass. These instruments attracted many students to study experimental science at Dickinson and brought the College unprecedented prestige.