The Chemical Experiments of Political Radicals 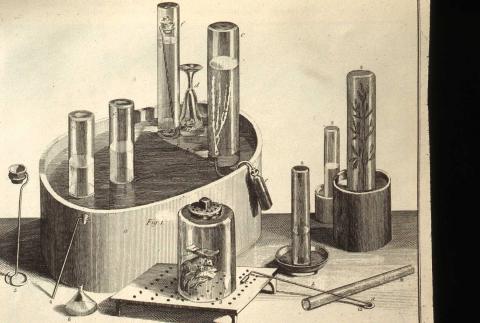 In the insulated glass enclosures pictured here, Joseph Priestley’s experimental objects: several plants and two mice were living vibrantly. They were breathing the air Priestley first extracted from burning mercury oxide, an air that sustained life and combustion, that Priesltey called the “dephlogisticated air”. To his death Priestley adamantly rejected the new chemical system of Antoine Lavoisier, who called the air Oxygen and worked to overthrow the system of Phlogiston. In the early 1800s, decades after Lavoisier’s quantitative system was well-established in the scientific community, Thomas Cooper, Priestley’s good friend then teaching at Dickinson, still expressed strong belief in the validity of the Phlogiston theory. Why, when almost the entire chemical community accepted Lavoisier's new system, did Priestley and his Phlogiston friends refuse to accept it?

To Priestley and his fellow Phlogiston chemists like Thomas Cooper, there was something repulsive about the meticulously quantitative system. Often political radicals and religious dissenters, they were outspoken doubters of arbitrary power. Their belief in democracy and equality was inextricably linked to their ideas in science. Every man, they thought, could fulfill his passion in science by doing experiments on his own and reaching observational conclusions. These beliefs motivated them to engage in experimental science and scientific education, which both Priestley and Cooper were involved in at some point in their lives. However, when investigators started to measure experimental results to the fourth or fifth places of decimals and experiments started to rely increasingly on advanced apparatus, science lost its public accessibility and became more exclusively for scientific elites. To Priestley and his Phlogiston friends, this was unacceptable.