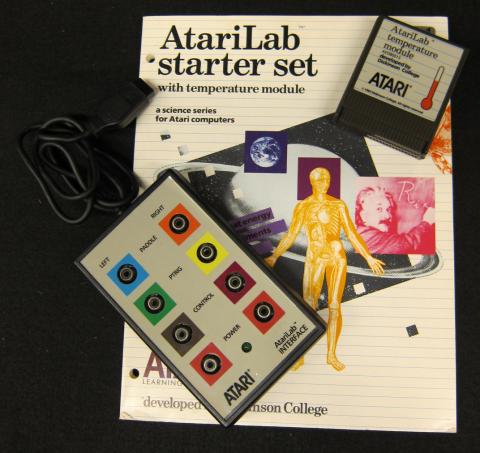 The AtariLab Temperature Module was a physics education tool developed in the early 1980s by Dickinson Professor Priscilla Laws, to be plugged into an Atari Computer.  Using the switchboard an a variety of pluggable sensors, students could electronically record, graph, and analyze data in hundreds of temperature experiments.  As one of the earliest education devices developed for home computers, the module could be attached to existing game consoles or to the emerging personal computers.  Laws also developed a module for studying light, but the project was eventually phased out because of a crash in the electronics market in the mid-1980s.  Situated at the verge of the personal computer revolution, the AtariLab module gives us a glimpse of the many different possibilities posed by the personal computer.  Was the computer going to be an extension of the video game industry, a refinement of mainframe computers, or something completely different?  The AtariLab module shows how each of these avenues was a possible path for the development of the microcomputer.