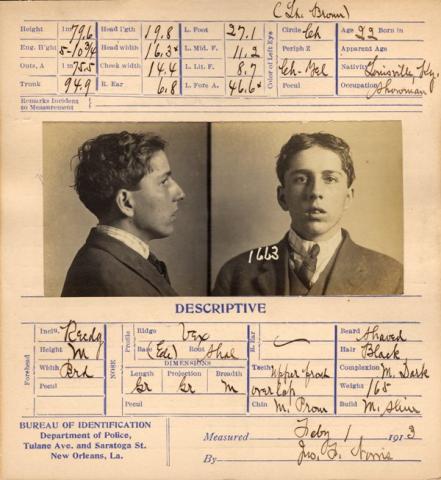 “Without changing his position, the arms of the prisoner were stretched at full length, and the third measure taken--one metre, fifty-nine centimetres (five feet, 2.6 inches)…The next step was a little more complicated. The subject was ordered to sit down, and a jointed compass, furnished with a semi-circular scale divided into millimeters, was applied to his head, one foot being braced against the root of the nose, and the other moved over back of the skull, in search of the point of greatest depth… After three trials the greatest depth was found, and 19.2 centimeters (7.56 inches) read out. In the same way the width was taken, 1. 7.3 (6.8' inches), and then followed measurements of the ear...”

These calculations, observed by a visitor to Alphonse Bertillon (1853-1914), were carried out with great vigor by Bertillon himself, a French police officer who was recognized as the “Father of Scientific Detection”. In Arthur Doyle’s novel The Hound of the Baskervilles, a visitor to Sherlock Holmes calls Bertillon instead of Holmes, his host, “Europe’s highest expert in criminalistics.” One could imagine Bertillon’s great fame and authority in criminal sciences between the mid-19th century and the early 19th century.

As the crime rate increased in Paris in late 19th century, Bertillon became dissatisfied with the inefficient system for identifying repeat criminals, which involved very general description and poorly organized photographs. Bertillon therefore aimed at inventing a new system of identification and recording, an anthropometric system that measured the body of human being. After years of doing measurements on the prisoners, he invented in 1883 a new system of identification called “Bertillonage”. The Bertillonage involved ten measurements: height, stretch (distance from left shoulder to middle finger of raised right arm), bust (torso from head to seat when seated), head length (crown to forehead) and width of temples, width of cheeks and length of the right ear and the left foot, middle finger and cubit (elbow to tip of middle finger). Because these features remain constant in an adult’s life, once the police obtained a set of measurements, a suspect or some traces left at the criminal scene could be immediately linked to the records and solve a case.

From then on, Bertillon claied that every single human being could be identified. The abstract idea of human identity was quantified and captured into the set of measurements, recorded neatly in the police system. As Bertillon proudly observed himself: with the Bertillonage system, he would “fix the human personality, giving every human being an identity, an individuality that is certain, durable, invariable, always recognizable, and which can be established with ease”. Rapidly, the Bertillonage was widely adopted by justice systems throughout Europe and in the United States.

However, during the 1890s and early 20th century, the Bertillonage was gradually replaced by fingerprinting as the standard identification technique. As the system was spread across the continent and across the Atlantic Ocean, it lost its rigor in measurements and was subjected to frequent errors and miscalculation. The lack of skilled, professional operator and the expensive, time-consuming process all made Bertillonage an ineffective technique compared to fingerprinting.

However, even as the anthropometric system yielded to fingerprinting identification, two decades into the 20th century many people in Europe and the United States still firmly regarded anthropometry as the most “scientific” identification technique. Where did that mentality come from? To answer this question, we need to take a look at the scientific culture of the time.

Anthropometry in the late 19th, early 20th century, with its counterpart disciplines: biological anthropology and physiognomy, was closely connected to the social Darwinian idea of racial hierarchy. The popular anthropology exhibit: St. Louis World’s Fair in the United States offered visual proofs for “human evolution” by presenting in real person from the “savage”, “monkey-like” tribal people, the “picturesque” Islamic Moros, all the way to the fair-skinned Caucasian. It therefore demonstrated certain races to be “less evolved” than others, namely the white race. Such anthropometric activities were valued by prominent scientists and white Americans alike as the “scientific evidence” of “racial differences”, and thus of perceived white supremacy. Therefore, anthropometry, as a sophisticated and expensive measurement system, was associated with the identification of the more superior white people, while fingerprinting, a novelty at the time, was used as an “emergency” technique for the “undistinguishable” racial “others”: the Chinese immigrants, the natives, and the black, who were deemed unworthy of such a “scientific” system.

Eventually, after the 1920s fingerprinting gained acceptance and predominance. But the taint of racism followed through, all the way to the dominant identification technique of today: DNA typing. However, it is important to recognize anthropometric identification’s role in revolutionizing people’s view towards the uniqueness of bodily identities.