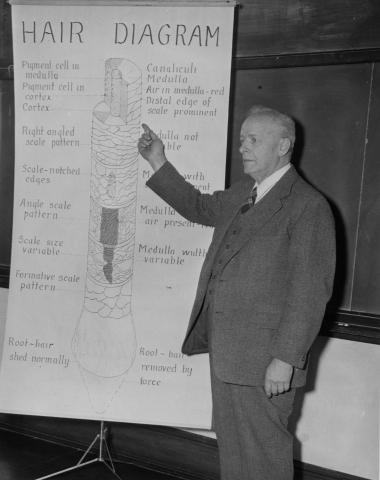 When the body of a beaten and strangled woman was found at Plymouth, Pennsylvania on February 7, 1945, the police for a moment felt lost about what to do due to the lack of clues. They found a tiny bandage with a blood stain too little for blood testing and three hairs stuck to it. Someone proposed that they could use the help of a nearby Dickinson biology professor, Milton Eddy, an expert on hair identification. Running out of ideas, the police figured they might as well have a try.

When the little white-haired old man, Eddy, dashed into the room asking to see the bandage with something close to frenzy, the chief of police was a little skeptical about his ability to solve the problem. Having collected the bandage, he put it "lovingly" into his pocket, and left without a look at the body. After long study under the microscope, Eddy told the police that two of the hairs belonged to the dead woman, and the other belonged to a man, possibly the murderer. “You find a suspect and I’ll tell you whether you’ve got the killer.” With the help of the mother of the dead woman, the police narrowed down their investigation to a suspect, who after long questioning denied any association with the crime. After searching the man’s house, however, the police found a brown shoe with a single strand of hair stuck to the sole. Delighted, the police sent them both to Dr. Eddy, who confirmed that the hair on the shoe belonged to the woman and that the hair on the bandage belonged to the suspect. Confronted with Eddy’s evidence, the man confessed his crime.

As such, Milton W. Eddy (1884-1964) was able to surprise numerous detectives and police with his ability to identify criminals from just hair and fiber. The first person in the nation to apply hair testing to criminal investigation, he had helped in convicting a score of criminals involved in murder or assault. His most famous case was the Babes in the Woods in 1934, when he found out the relationship between the dead twenty-four hours before the police did. He came to Dickinson College in 1921 as a professor of biology and the head of that department. Remaining in the college ever since, he had educated many outstanding students. Recognized as the country’s leading authorities on the classification of hair and fiber, he had contributed greatly to the fields of both biology and criminology and was named in the American Men of Science as “the Who’s Who of the Scientific World”. Eddy's hair identification is part of a longer history of the scientization of identification.