Fingerprints: the Convoluted Patterns of Racism 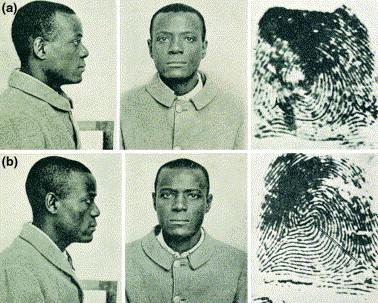 On May 1, 1903, an African-American man named William West entered the prison at Leavenworth in the United States. Upon entry, he went through the routine Bertillon system of measurements. The identification clerks soon matched his measurement and photograph with those of William West, a previously convicted murderer. The police were not surprised at all by the capturing of another recidivist using the powerful anthropometric system, nor were they surprised by West’s denial of such conviction. However, to their astonishment, another William West, the owner of the previous record, was found to be already serving his sentence in the same city. The two Wests looked similar and had the same anthropometric measurements, but their fingerprints differed substantially. Therefore, claimed the pro-fingerprinting activists, the anthropometric system was obsolete, and the age of fingerprinting had arrived.

The legend of William West was popularly regarded as marking the death of anthropometry and the triumph of fingerprinting. However, closer historical examination done by some scholars shows that this story was a manipulated version of the truth, the propaganda of the pro-fingerprinting activists in the early 20th century. What was at fault in the West case was not the anthropometric system, but the police officials’ glossing over of a 7mm difference in the two men’s foot length, a much larger deviation than what was allowed in the rigorous Bertillon system.  With such pretence, the pro-fingerprinting activists claimed that, because the two black men were “undistinguishable” from their bodies and faces but distinguishable from their fingertips, fingerprinting was a much more reliable identification technique. Such perceived homogeneity of racial minorities was exactly the basis on which fingerprinting gained its new authority.

The realization that no two individuals have the same fingerprint could be traced back to prehistoric time, when fingerprints were left on pottery, possibly showing authorship. However, fingerprinting identification system was born almost simultaneously with the anthropometric system, in the late 19th century. The challenge of the fingerprinting system lies not in matching an individual’s fingertip with a record, but in systemizing the convoluted patterns of fingerprints, which compared to the quantitative records of the anthropometric system, was much harder to classify. The numerous attempts at classifying patterns soon led to the proliferation of categories, which did not help organization at all. In 1880, Charles Darwin’s cousin Francis Galton saw a great potential in the new fingerprinting technique. He thought that the application of fingerprints could help the colonial government identify the native Indians, whom the colonial officials claimed to be undistinguishable. Motivated by this thought, Galton designed a more efficient categorization: “arches,” “loops,” and “whorls”. Later, colonial police official Edward Henry further improved the system based on Galton’s tripartite categorization by designing an effective way to sort loops and whorls into smaller groups. This new identification system was tested in the criminal system of colonial India by the British government, which turned out to be a great success. Thus, fingerprinting received its credibility rivaling that of anthropometry.

In the 1920s, fingerprinting gradually took over as the dominant identification technique all over the world. The system allowed unskilled officials to quickly obtain a ten-finger record and submit it to the central bureau, which managed the record. Compared to the expensive and time-consuming process of the Bertillon system, the advantage of fingerprinting was obvious. Meanwhile, it transformed the “visual culture” in identification techniques. The Bertillon system, with its meticulous measurements and special photographs, provided a visual and quantified representative of the originally elusive nature of human identity. However, this system was subjected to the fallibility of human operation and interpretation, as denoted by the William West’s case. Fingerprinting presented human identity instead in an abstract but more objective form. It is a “universal language” unaffected by the variations in measurement or human subjectivity. The uniqueness of human identity, condensed into the abstract pattern on the skin of fingertips, now seems to circumvent racial categorization and achieve a universal nature.

However, one could not omit the fact that fingerprinting derived its origin from the perceived homogeneity of Native Americans. Thus one could find in this identification technique the continuous effort to “racialize”. The profiling of fingerprint records into the “yellow”, “white” and “black” tri-categories in the 1920s police system demonstrates this taint of racism. A captain in the New York Police Department Identification Bureau remarked that: “…when a Chinaman or a Japanese is brought into your bureau, you can simply mark on the front of the card, ‘Yellow,’ the same as you would mark it ‘Black’ for a negro”, thus producing smaller, more manageable files. The mentality of racial distinction therefore continues to be reinforced in criminal indentification, passed on from one system to another often as a strategy of expediency. However, the question of when such mentality would materialize into injustice is a subtle one, as in the case of the second William West.