From the “Criminal Face” to Modern Identification Techniques 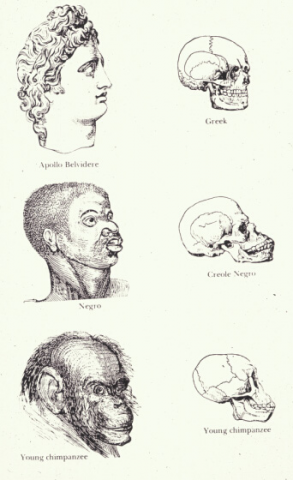 Hair identification was only one part of a longer history of identifying criminals from their bodies.We can find roots of such techniques in the science of physiognomy. Popular throughout the 18th and until the late 19th century, physiognomy was the judgment of people’s personality from physical features, especially the face. Some researchers during that time used it to determine criminality, disease, and personality. For example, “sugar-loaf” skull shapes, “pointy heads”, “hunchback”, “heavy jaws” and “receding brows” were seen as indicating criminality. Besides, physiognomy was also widespread in the literature during that time, including famous novels like Jane Eyre. Physiognomical techiniques were often used to justify white supremacy, categorizing whole groups of people in terms of racial "character". Today physiognomy, together with other racial sciences like phrenologhy which was based on the measurement of the human skulls, are deemed as psudosciences. The late 19th century marked the invention of a number of identification techniques. Instead of determining types of people, they started to determine the criminality of individuals.

Soon after their invention, identification techniques were put to broad use. They enabled criminals to be linked with the traces left at the scene, whether it is a footprint, a bloody fingerprint, hair, or some semen. It also allowed the police to keep biological records of criminals, rendering their history visible to the state and controlling their potential threats. In 1883, Frenchman Alphonse Bertillon found that certain adult features such as the bone structure remain constant and relatively unchangeable throughout a person’s life. A criminal could dye his hair, change his body shape and dissimilate his height, but once he left a Bertillon measurement record at the police, there was a much higher chance for the police to capture him. Also in the 1880s, several experimenters including Darwin's cousin Francis Galton started to use fingerprints to record individual identities. About a hundred years later, the technique of DNA typing was able to solve its first criminal case of a British serial rapist and killer.  Therefore, from the 1880s on, an individual’s identity ceased to be an abstract, elusive idea – it became unique, concrete and tractable. However, people’s desire to “diagnose” criminology from individual’s body before the crime occurs never disappears; seeking of such signs in individuals led to racial stigmatization, eugenics, and the marginalization of the “others”.

Today, various identification techniques such as fingerprinting, DNA typing, retina scanning and voice spectrometry have expanded their reach to the civilian population. They are utilized in various areas such as immigration, workplace security, and Welfare disbursement. They have become a regular part of state governance and people’s daily life.

Picture from from Josiah Clark Nott and George Robert Gliddon's Indigenous races of the earth (First published 1857). The book uses this picture from 1868 to demonstrate that black people were as distinct a "race" from the Caucasian as the Chimpanzees.