Babes in the Woods 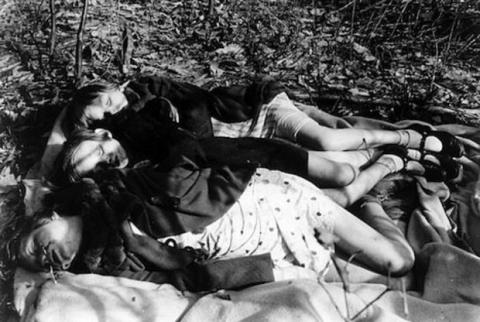 On November 24, 1934, two men looking for firewood went into the forest of South Mountain in Cumberland County, PA, about 30 miles west of Dickinson College. Their attention was caught by a green blanket covering something like a knoll. Expecting it to be a deer carcass but puzzled by the way it was covered, they lifted the blanket and was horrified by the scene. The bodies of three little girls were lying quietly together. Autopsies of the girls showed that they had been suffocated and had not eaten for a while. The next day, a man and a woman were found shot to death over 100 miles away near Altoona, PA. At first, the two cases seemed unrelated.

The news spread quickly across the nation and people were shocked by the atrocity of murdering three young children. Thousands of people visited the scene in an attempt to identify the children, but none of them succeeded. With the help of a Dickinson biology professor: Dr Milton W. Eddy, an early authority on hair identification, the police determined that the three girls were siblings and that they were related to the two dead adults. The man was the father of the girls and the woman was remotely related.

Soon, a woman reported having seen a couple with three young girls eating at a restaurant in Philadelphia on November 18. Still better clues emerged as the police found a deserted suitcase and a blue Pontiac sedan, which were all found to be related to the family. Eventually, a full story came to light. The three girls: Norma Sedgwick, 12, Dewilla Noakes, 10, and Cordelia Noakes, 8, were the daughter of Elmo Noakes, whose wife had died two years ago. It was speculated that, having begun a relationship with his niece and housekeeper Winifred Pierce, Elmo Noakes decided to leave his disapproving family, travelling with his niece and the three girls in search of a new life. As the family travelled while Elmo sought unsuccessfully for a job, the three girls gradually became a burden to Elmo. Perhaps unwilling to see the girls starve, he suffocated them, leaving them in the woods of Cumberland County. He and Pierce continued to travel West until their car ran out of gas. The next day, maybe out of despair, he bought a rifle with their last few dollars and ended his niece’s and his own lives.

The Babes in the Woods case became a sensational crime in the wake of the kidnapping and murder of the baby of Charles Lindbergh, the famous aviator and American hero, two years before. It was one of the numerous sensationalized crimes of the Great Depression era. The use of hair identification provides us a glimpse into the development of forensic technique at that time.

Picture credit given to: http://photos.pennlive.com/patriot-news/2013/04/babes_in_the_woodszip.html